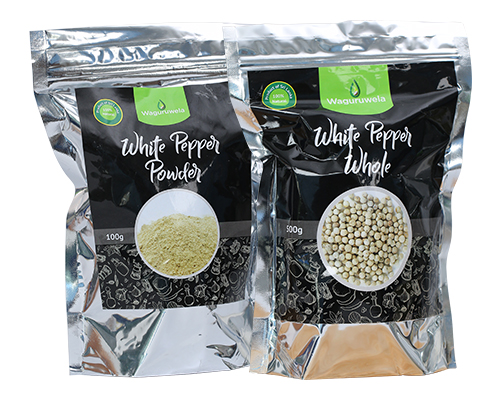 White and Black pepper both are originated in same plant which commonly known as pepper plant or scientifically known as Piper nigrum. Technically both are processed by two different process, black peppercorns are picked when almost ripe and sun-dried, turning the outer layer black but white peppercorns, this outer layer is removed before or after drying, leaving only the inner seed. White pepper tastes hotter than black.

White pepper help you to fight with certain cancers specially colon cancer also its aid digestion process by inducing secretion of hydrochloric acid, which is necessary for digesting proteins and other food components. Nevertheless it’s contain considerable amount of fiber it can stimulates peristaltic motion and increased secretion of gastric juices, which eases digestion, prevents conditions like constipation, and protects the body from more severe diseases like colorectal cancer.

White pepper hold little amount of manganese, which is an essential cofactor in some enzymes important in antioxidant defenses. White pepper brings you many more benefits including fights tooth decay and provides quick relief from a toothache, piperine in white pepper battles fat by blocking the formation of new fat cells also its make healthy bone and Piperine, in white pepper, has shown to be effective against vitiligo, a skin disease that causes areas of the skin to lose their pigmentation.